Lane gets +2 bullets while he has a Horse.

"Max, I understand the need for security, but if Healey keeps interfering with the law, he's gonna end up on the wrong side of it." - Dave Montreal 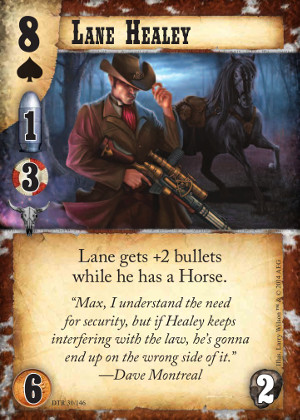 Lane Healey is actually a pretty good dude for a starting posse in a Morgan deck that wants a dedicated shooter from the start (that is, not Landslide).

As compared to the usual stud of choise, Jarret Blake, Lane costs 1 more up-front and 1 more during upkeep. For this money you get +1 stud bullet (conditionally) and +2 influence. Paying 1 gr each turn for 2 influence is actually not a bad deal (there are only two dudes in the whole game that have 2 influence and no upkeep - Irving and Arnold).

The good thing about having a high influence dude in Morgan is that you can use the outfit ability more effectively. The bad thing about it is that you will have to boot your main shooter in order to do so.

♥ This is where Pinto comes to help. Not only does this horse give +2 bullets to Lane Healey, it also allows him to use his 3 influence to bring new deeds into play, while still letting him enter into shootouts this turn! And it also makes it easier to come back to town from an out-of-town deed, like Blake Ranch.

♦ Blake Ranch has a value of 7, just like Pinto, it costs just 1 gr to buy using Lane's influence, and it generates a lot of money that helps to pay his upkeep. Another deed at 7, Cattle Market, is not bad either.

♣ Run 'Em Down! is a great action that is very synergic with Lane Healey. Imagine the following scenario: you boot Lane to play an in-town deed, then watch as the opponent's dude moves through the town square on his way to occupy another one of your deeds that is seemingly defenseless now. And you Run 'Em Down!

♣ Kidnappin' and Pinned Down are also great actions that you'd be happy to play in your deck. Kidnappin' in particular is so much better combined with Pinto! And even Hired Help might come in handy, especially if you play James Ghetty.

♠ James Ghetty, another good card with a value of 7! In the late game he'll cover all yer flamethrowing needs, making him another great stud with pretty good influence.

♠ Other dudes at 7 are Androcles Brocklehurst and Roderick Byre - the first will provide extra influence and might generate you some money, the second is a backup mad scientist whose skill is just enough to reliably create those Flamethrowers in a deck full of 7s, where James Ghetty might fail.

Lane Healy saves you money on deeds, he keeps the opponent from winning, and he shoots your enemies dead - even while booted! The only thing he asks in return (besides upkeep) is that you play enough horses in your deck. Pinto is great, but if you want to make your deck even more stable [hehe, stable... get it? ;) ], you might want to consider adding other horses as well.

♥ Roan is a cheap horse, which is good, but its ability is not really all that great. Especially in a deck where your main shooter will spend a lot of time booted. And it's a 6, which is not a very good value.

♥ Mustang's ability is great, but the cost is quite high, and its value of 5 might make you fail at creating Flamethrowers. But if you're not playing gadgets, then by all means! 5s are a great value, with Pistol Whip and Charlie's Place and Pearl-Handled Revolver for your Travis Moore... no good dudes at 5 for Morgan, sadly.

♥ Mechanical Horse is the same as Roan - same cost, same ability - but it also acts as a multiple-use Mustang, if you have money. It's a gadget, though. And a 9, on value with Cheatin' Varmint and Jarret Blake.

Lane Healy is a great starting dude -- if you build your deck to support him, that it. 7s are his best friends, and 8s are generally excellent. More cards that are synergic with Lane are General Store, Pharmacy, Missed! (all Queens), and Buffalo Rifle.