Resolution: Boot or discard your stud dude. If that dude was a Deputy, send the opposing shooter home booted. Send all dudes in your posse home booted. 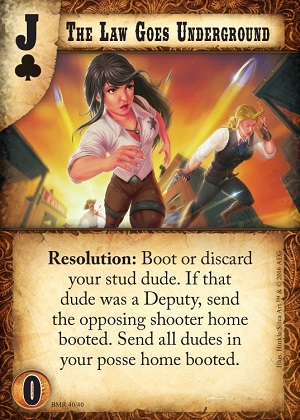 Firstly, yes it does have 'Law' in the title, and a 'Deputy' appears in the ability text. That does not mean your home has to have the ✪ symbol to play this card.

What does this card do. Well, it saves your butt. Have you ever gotten into a shootout with a great chance at drawing a great hand, and lady luck cheats on you. Maybe you just drew every off value card in your deck. Maybe your one card short of a 4 of a kind, but all you have is a 3 of a kind. Maybe you just can't make a legal hand and your opponent has Quickdraw Handgun. Discarding a stud dude can be far better than taking 3+ casualties.

What else can you do with this card? It seems so defensive, sending your dudes home to end a shootout. This card can actually allow you to be extremely aggressive. If your opponents cheating resolution cards only affect hand rank, and don't affect dudes directly like Coachwhip!, you can go ahead and play that cheating 5 of a kind if you see it. You'll know if they have a response, and if they do, it won't cost you as badly, especially if your stud is unbooted. Straight flush decks are inherently high risk / high reward, and this card allows you the chance that if you don't get the straight flush with your best dudes in a shootout, it won't be game over.

Oddly, with proper maneuvering, it can be used to put a bounty on a(n) opposing dude(s). Have a private deed adjacent to home, move a stud there. If opponent accepts a shootout they get bounty. You try for the best hand you have, and if you lose, you just go home booted. If your stud is a deputy, their shooter is home booted as well. This can help retake your deeds for income or control.

This combos exceptionally well with Many Speak as One, and Bounty Hunter. It is very good with any studs that jump into a shootout as well. Of note on value is Sarah Meoquanee. This card may well make The Lord Provides a strong inclusion for miracle decks.

Counters include No Funny Stuff, Rabbit Takes Revenge. Also, if all opposing stud dudes are booted, they will have to discard a stud to use this card. Nightmare at Noon can be especially hampering to this card. Interestingly, The Law Goes Underground ignores Scoop Hound and Siege Of The Orphanage since it neither is a shootout play, or fleeing.