Shootout Hex 4, Boot: One opposing dude gets -1 bullets and -2 value. If that dude is aced or discarded during this shootout, this Huckster permanently gains 1 control point.

"The advantage is mine for the taking." - Jonah Essex 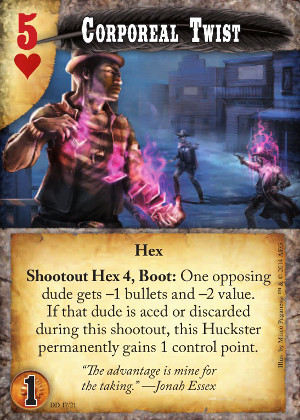 Probably my favorite card in the game. Too many good combos to ignore here.

Shotgun Seriously, that is silly, especially if you have a monster with bullets, and makes it a potentially core combo for Sloane hucksters, with Jonah Essex involved.

Soul Blast is kind of an obvious one. But it gets better when you realize that you can stack it up with other reducers like Unprepared or Charlie's Place. Zing. I have seen Sloane get iced by Steele Archer with this combo.

I want to see more use of stuff like this combined with Buffalo Rifle, just to see what silly protection shenanigans you can pull off with it. I can see some interesting interactions with someone's Surveyor's Office and stuff like Jackson's Strike to control a large number of out-of-town deeds in The Sloane Gang or The Fourth Ring as a counter to Morgan Cattle Co., but it needs a clever way to unboot spells and gear.

I did also mention new star player Stone Idol with this guy. Such shenanigans. So hilarious.